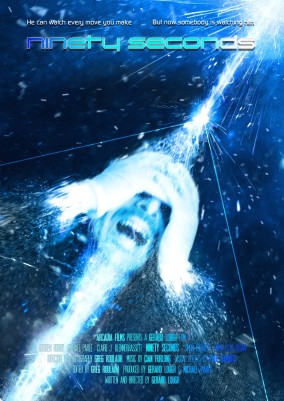 Ninety Seconds certainly is ambitious. In many ways it feels like a concept for a feature film that’s then been condensed down into just under half an hour. It is set a short distance into the future where the invasion of privacy has been taken to extreme levels, and surveillance experts have access to all sorts of advanced gear which they will happily use on anyone their clients tell them to.  The film follows one such person (Andrew Norry) as he takes on a new job and has to deal with the multiple complications that it brings. The premise is an interesting one, but unfortunately the film cannot streamline itself into being about one specific thing, and ends up just trying to do more than its medium is designed for.

The standout element from this short is its score. It’s evocative and eerie, and like the rest of the film it takes a lot of inspiration from Blade Runner. The noir, cyber punk feel that the film has does work well, with its distinctive visual style contributing heavily towards that. These two elements are the best things about the film; they do overshadow the performances a little at times which is a shame, but it’s great that it manages to create such an atmosphere. The visual effects do sell the slight advancements in technology, such as the holograms, but it does feel as if that’s where almost all of the budget went as elements such as costumes do feel rather uninspired, almost amateurish.

The most interesting scene for me was the futuristic burlesque dancing scene that featured Emma Eliza Regan. Since seeing her in last month’s Short Film Monday’s OutThere I’ve been keeping an eye out for her in other things as I think that she shows a lot of promise. Here she is only on screen to do her dance number, which is slightly disappointing as having her character do a little more would have helped flesh out the film’s storyline somewhat. As to the scene itself, I really like the concept of having dancers performing in front of a classic film such as Nosferatu, their silhouettes interacting with the events on screen. Something about that idea just clicks with me. And whilst it does work well within the film, injecting a sudden shot of life and noise into what’s otherwise a fairly still and quiet piece, I still can’t help but feel that it wasn’t explored to its full potential.

I appreciated that the film took steps to suggest at a larger world beyond that which we see in the film. Little details are presented to us but are not explained, and they are suggestive of a filmmaker who knows the world in which his events are set. And it’s work like this which helps give the film its potential. Unfortunately this potential isn’t fully realised; elements hold it back such as the dialogue that needs work, and the narrative that needs tightening up. It seems that for every intriguing moment that occurs, there’s normally something else that’s holding it back.