Next up in this celebration of Tarantino’s 50th birthday is a review of one of his favourite films – ‘Carrie’.  Many thanks to Armando for contributing this post!  Please take the time to check out his great blog here. 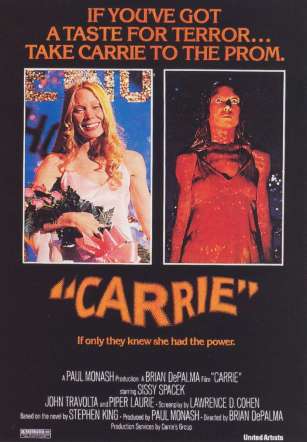 ‘Carrie’, directed by Brian DePalma, is one of his favorites. I know. One will think: Oh, I get it. It’s the blood, but I will tell you, no. It’s not. While that bucket of pig’s blood is poured rather expertly, it’s not just that. ‘Carrie’ is more of a portrait on human nature than a bloodfest. This Tarantino adapts (he’s King Auteur, after all) and makes convincing, complex characters of his own in his films.

In the film we follow a pimply, introvert high school girl named Carrie (Sissy Spacek). At home, she is punished for having a period, being asked to the prom, and breathing one too much air (?). Her mother (Piper Laurie) has an outlandish, maddening faith in some made-up religion. In the later parts of the film we learn the events that bring to her mother’s obvious mental instability.

Spacek and Laurie, together or apart, are both great in the film. They make unnerving chemistry on screen; a young girl realizing life and a mother on the fringes of sanity.

At school, Carrie is constantly picked on. One terrible incident earned her a friend, and then the sympathy of another. Soon the school’s A-student/jock asks her to the prom. This is a film populated with awful, cruel teenagers and some that are human enough to rethink the horrible things they made. Their terrible decisions lead to a climactic tragedy at prom night.

This film makes use of the fear of the unstoppable. Even if you watched it a couple of times and already knew what is bound to happen, you still think of an escape route and save Carrie from this fate.

Based on a novel by Stephen King (his debut), the film is considered as one of the most chilling films to experience in the genre. I believe it deserves it. Quentin may have thought the same as well.