The WordPress family are out enjoying the sun – Awards

Many thanks to Fernando over at Committed to Celluloid for awarding me two awards! This is actually second time I have receieved the Sunshine Award as Vinnieh also made me a recipient a short while ago, so many thanks to him as well!

As always with these things, there are rules:

So, now for my ten questions!

Which Ten Guests Would I Like to Attend My Fantasy Dinner Party?

Julianne Moore, Kate Bush, F. Scott Fitzgerald, Marilyn Monroe, Virginia Woolf, Angela Carter, Jack White, Patti Smith, Franz Kafka & Johnny Depp. I have no idea what the group dynamic would be like, but I like to think it would be interesting to observe!

Magnolia’s – I’m not going to spoil it for those who haven’t seen it, but if you have seen the film then drag your mouse over this next period of white to reveal my thoughts! There’s some barely explainable magic to that last shot, after all of the pain, suffering, and down right crazy apocalyptic events of the film have taken place, we are given this very grounded quiet scene with which to finish on. Aimee Mann’s ‘Save Me’ covers and blurs the dialogue so that we can only hear snatches of what is going on and then Melora Walters raises her head and smiles straight at us. That smile seems to just break through everything which has gone on in the film, it’s full of a curious kind of hope, and it’s directed straight at the heart of the viewer. Apparently it’s the scene which Paul Thomas Anderson first thought up when writing the film, and I find it to be uniquely powerful. If you haven’t seen the film, then I really urge you to!

Berlin. There are many city’s in competition for that top spot including Warsaw, Osaka and Prague, but none of them can beat Berlin’s combination of history and current freshness. The entire place is a mixture between old and new, and it’s as exciting as it is beautiful. 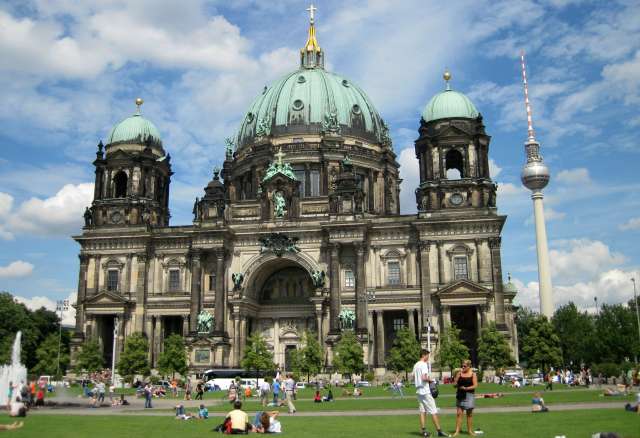 Ryan Gosling in The Place Beyond the Pines. Here Gosling displays all of the magnetism which could make him a legend in film history; he has a particular power to fix your attention and not let go, and in this performance he manages a complex and memorable character who is easily the best element of the entire film.

Which movie villain would I least want to encounter?

The shark (aka Bruce) from Jaws. It’s one of my absolute favourite films and I’ve watched it a million times, and yet my longtime fear and fascination with sharks still means that I am deeply affected by Jaws. If I ended up in the water with one, any fascination that I have for them would evaporate and I would thrash around until it bit me in half. Especially if that theme song started up. Once that starts you know you’re dead.

Which blogger would I choose to help me fight them off?

Tyson Carter from Head in a Vice – on his honeymoon he jumped into the water with sharks (read about it here), so he’s clearly less fearful than I am regarding them. He may be crazy, or maybe he is just good with sharks – either way, I want him on board.

Naturally this is one hell of a tough question, but I usually go with Nancy Sinatra’s Bang Bang. It’s very simple and yet loaded with an extraordinary amount of emotion I find.

Which movie hero would I not want to accept help from?

There are a lot of bumbling, idiotic heroes out there that I wouldn’t really want help from, but I’m going to say Clint Eastwood’s man with no name. Sure he will get the job done efficiently, and yet I wouldn’t want to owe a debt to this man. In fact what’s to stop him siding with my enemies, whichever side gets him the most cash wins after all.

Directing films, and writing many scripts for a whole host of actors that I admire is the ultimate fantasy, but if I could write a script and have either Julianne Moore or Alfred Molina speak the words that I have written – that would be enough. Tom Hardy is, in my opinion, the most exciting actor working today. He is flexible in his role choices but always does his best with a part, and normally far exceeds what’s on the page. Whether he is dangerously quiet, shrieking in heartbroken pain, or just playing it cool – Hardy always delivers.

Right, and now for the ten blogs which I shall be passing this along to. For those who want to take part, feel free to change the questions if you would like to, or stick with mine! Here are my picks: