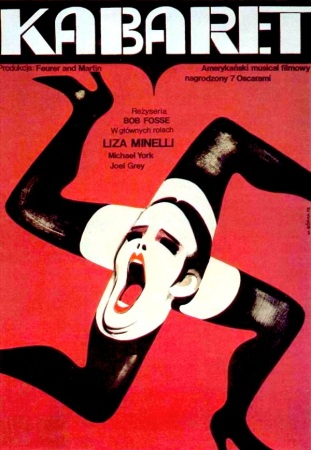 Bawdy, moving, joyful, and chilling – Cabaret confidently weaves through each of these states with apparent ease.

Set in Berlin in 1931, we follow a group of individuals through a decadent world in which morals are loose, sex is everywhere, and the Nazi party is beginning to rise in popularity and power. The primary focus lies on Minnelli’s Sally Bowles; a singer at the Kit Kat Club who aspires to be a great actress, and it’s a role in which Minnelli excels. The only actor which truly threatens to steal attention away from her is Joel Grey who masterfully plays his narrator role; controlling our attention and creating an absorbing and layered character.

The other actors should not be forgotten, they all do a fine job in their roles and they are not as overshadowed by Minnelli and Grey as I have perhaps suggested. If they were this would be a lesser film; it’s the spread of nationalities, religions and attitudes found across the cast of characters which helps to lift this film well above and beyond the average musical. Although, Minnelli and Grey do get an additional focus because they are the only members of the central cast to sing songs during the film. And it has to be said that there are several very memorable songs here, ‘Mein Herr’, ‘Cabaret’ and ‘Tomorrow Belongs to Me’ being amongst the very best.

Cabaret is by turns a cheerful, fun experience as Minnelli belts out her songs and it’s also a decidedly unsettling one. There aren’t many films in my opinion which use the Nazi’s so effectively as Cabaret does. It weaves them into the narrative in such a way that it makes the film have a uniquely disturbing edge to it. Don’t let that put you off if you like musicals and don’t want to see a historical war film, it first and foremost is a musical. And yet, I know of several people who dislike musicals and yet like Cabaret because you don’t have people bursting into song unrealistically, as they are all sung somewhere logical. Basically, I urge you to give Cabaret a go regardless of whether you normally like musicals or not, it’s a powerful little film and it should definitely leave an impression.

What is the film’s greatest strength?
The way that the growing Nazi threat is interwoven with what at first appears to be a disconnected story of sex, love and aspirations.

Its greatest weakness?
There’s the suggestion made that a woman can enjoy being forced into sex, which is a shame.

Would I see it again?
Absolutely, I’ve already seen this film many times and it is in fact my second favourite musical, right after Singin’ in the Rain.

Thank you for reading, leave your thoughts in the comment box below!