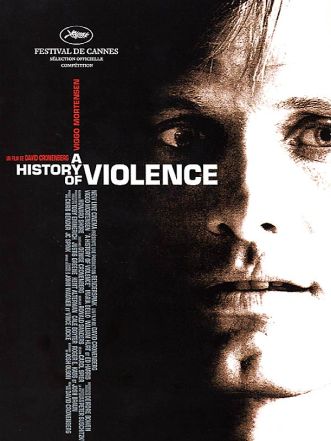 Violence simmers under the surface here, constantly threatening to explode

David Cronenberg’s A History of Violence is first and foremost a film about violence itself.  The plot here isn’t complicated; in many respects it’s secondary to the characters and the film’s discussion on violence as a means to an end, as a way of life, as a necessity.

We follow Viggo Mortensen as an ordinary likeable guy who becomes an American hero when he saves his co-workers and workplace from two dangerous criminals. This incident’s repercussions however prove to be severe as he is caught in a case of mistaken identity by a mysterious and threatening man (Ed Harris).

This film opens with some excellent displays of tension and unease, an achievement which isn’t quite ever matched again in the film. However, there is a constant threat of violence permeating the air in every scene, and when it manifests itself it is handled excellently. It may never quite reach the intensity of the first twenty minutes, but the violence throughout this movie is used sparingly, it’s uncomfortable to watch, and it always informs us about character.

The only thing which stops this from being, in my eyes, a truly excellent discussion on violence is that it doesn’t spend long enough looking at how the use of violence affects certain individuals within the protagonist’s family. There is breathing room here to have expanded the focus just a little bit wider, it wouldn’t have stretched the film too thin, but just enriched its discussion a little more. Ultimately though this is an intelligent look at violence and those who use it, and although it may fall just a tiny bit short of its true potential, it’s still very much worth seeing.

What is the film’s greatest strength? The first twenty/twenty five minutes which are excellent.

Its greatest weakness? The very slightly too narrow focus.

Would I see it again? Yes I would, I’m sure it will benefit from a second viewing.

Let me know your thoughts in the comment box below!