Without Ghibli’s normal charm and intelligence Arrietty is entertaining but a little weak.

I assume it is the source material for this one (The Borrowers) which makes the film feel oddly Westernised. That’s not a dig at the book which I remember liking many years ago, but Arrietty just seems to be lacking the depth which I’ve come to expect after having seen most of the studio’s output.  The film’s villain for example is nasty for the sake of it really. There is no meaningful motivation to speak of, and the character has no real opportunity to grow – something which strikes me as very anti Ghibli. The film’s set up for a heartfelt story full of wonder and excitement is sadly a little empty too.

Now, I should say that I do actually like this film somewhat. It’s not bad by any means, and I would rank it higher than most Disney or Dreamwork movies. The visuals are often beautiful, and numerous times they strongly contributed to me feeling nostalgic for childhood and the curiosity and beliefs which come with that. The fact that the film could generate that reaction was surprising considering how it just misses the mark in so many areas. The characters range from pleasant (Arreity herself) to bland or somewhat grating (Arriety’s mother for example). The actors do a perfectly fine job, but nobody and nothing within this movie is memorable for long after the credits roll. 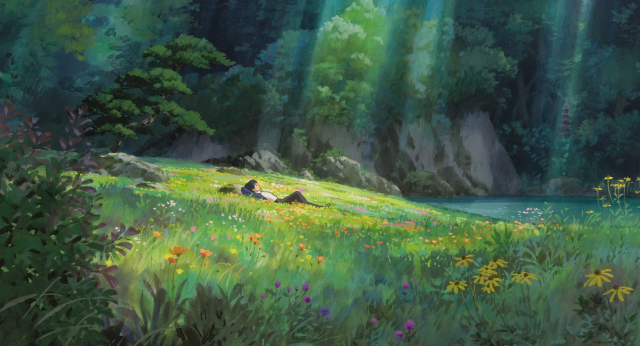 There is nothing wrong with Arrietty and yet there is little that is distinctly right about it either. It’s a perfectly good time to spend watching with kids on a rainy Sunday afternoon. It has an engaging even if not affecting story, and as always with Ghibli there is a sense of craftsmanship and care which seeps through every pore of the piece. Just for one reason or another this one doesn’t rise above the level it’s at and achieve something great. There’s missed potential here for sure, but there’s also a perfectly OK film to pass the time with.

What is the film’s greatest strength? It’s ability to capture something of the love children have for adventure and magic.

Its greatest weakness? The lack of any real emotional engagement.

Would I see it again? You’d be a little hard pushed to convince me it is worth my time… but I wouldn’t completely rule it out.