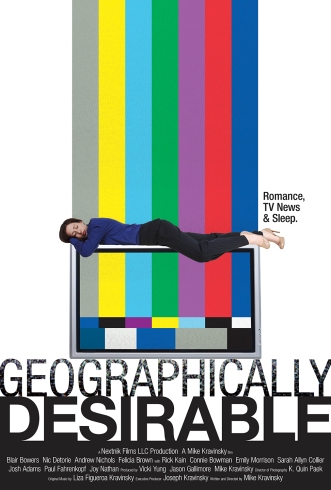 Transcending its rom-com genre, it becomes a commentary on modern life and its priorities.

The story of a workaholic who has to start reassessing the balance she holds between her work and her actual life isn’t particularly new, however in Geographically Desirable this journey is handled in a way that feels up to date and nicely handled. Bowers’ character works in a news room; she seems to spend most of her waking moments there and even when she leaves the office for home it follows her home on her phone. This isn’t a problem though, she loves her work and it seems to love her. Unfortunately, due to living in this world she has forgotten that the average person is offended when, during a conversation, you pull a phone out and start reading about the latest scandal.

When watching this movie I was reminded of Groundhog Day‘s Bill Murray character; a flawed and somewhat rude person, working in the news and who can’t appreciate the charm and warmth of smaller community living after having come from the big city. Make no mistake the films are fairly different; where we put up with Murray’s rudeness due to his humour, we accept Bowers’ because it is subtler and we know that it is unintentional and she is clearly nice at heart, where Murray’s distain for his location is based on prejudice and having been there a million times before, Bowers’ simply is thinking about her career. We go in to Geographically Desirable expecting a simple film with plenty of laughs, instead we find that this has its laughs spread thinner on the ground and instead is a genuinely well handled discussion on working life and how our priorities shape around it.

It’s really nice to see a film where the protagonist has a realistic progression throughout the film in a world where she faces all too relatable problems. Should she choose to sacrifice some of her work for a chance to enjoy some time away from the city, can she commit to an involving relationship and own a pet when she needs to work long unsociable hours in order to try and advance in her work? These may sound like mundane questions but they are very familiar to most of us, and here they are handled well so as to not appear uninteresting but rather their entertaining and you genuinely aren’t 100% sure which way she will choose. Perhaps the most up to date and worrying decision she faces is whether she can just enjoy a moment with a friend/loved one without checking her phone to see what’s happening at work. It may sound ridiculous but I think many people, myself most certainly included, know how easy it is to be glued to a phone 24/7.

My biggest complaint here is that a couple of the supporting performances could have been stronger. Nobody is awful, but given how nicely performed the central character is it’s a shame to see a couple of others not being as strong. The other complaint that I have is a small one but I feel is still worth mentioning. At times when Bowers’ is falling asleep a slightly wavy effect is added to the screen to suggest that she is going under and it feels incredibly cheap and outdated. Still though, that’s quite a small list of issues that I really had with the film. It isn’t ground breaking in any way but and shouldn’t be ignored by those who hate rom-coms, it isn’t really one at all.

What is the film’s greatest strength? Blair Bowers’ performance.

Its greatest weakness? A couple of the supporting actors.

Would I see it again? Yeah, given time I would check this one out again.