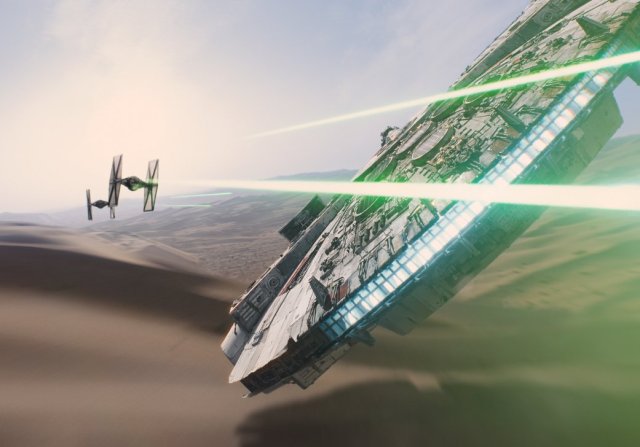 The first teaser for Episode 7 does exactly what it should do – it teases, excites and provides fans with lots to speculate about…

I first watched this trailer in silence as I was at work and had no sound – in short it made me pretty damn excited. Seeing so many staples of the Star Wars franchise like the Falcon, Tatooine and a lightsaber (still not completely sold on that one) just brought out that little kid in my heart whose first cinematic experience was the original movie. There’s a deeply embedded reaction to seeing these images which excites on close to a primal level, bypassing any real sense of objective criticism. Despite all of my reservations regarding the planned trilogy, my first reaction it seems is always going to be childlike glee.

A while later, when I had time to gather my thoughts and calm down somewhat I found the opportunity to watch the trailer with sound. That complicates things a little. The voice over (is that Andy Serkis by any chance?) is perhaps a little over the top, but the deep tone feels Star Wars-esque and I’m not going to be judging that voice too much on such a short clip. What the narration is saying doesn’t confirm a whole lot either; it’s enough to generate speculation but broadly just says things we had already either known or assumed about the upcoming film. In all honesty I wasn’t bowled over by the narration… but I wasn’t exactly underwhelmed either. I’m not especially excited about the story as of yet (I’m sure that will come later with more in-depth trailers), but what I am excited about is seeing those images and hearing the music. That’s what makes me want to be a kid again; to go back to when I first sat in the theatre and experienced a deep sense of wonder and flurry of emotion as the opening credits rolled and I heard the Star Wars theme play.

Right, I’m going to stop jabbering away for now and I’ll leave you with the trailer on the off-chance that you haven’t yet seen it. Let me know what your thoughts are by writing in the comment box below!