One of the hardest things to create on screen is charm, and one of the others is intelligent simplicity, and yet amongst the most notable features of the BBC’s adaptation of Esio Trot was how well it succeeds at creating both of those elements. Richard Curtis’ scripting on films such as Love Actually and Notting Hill is perhaps not most noted for its subtlety, but here the nuances of old age relationships are duly observed so they can be fleshed out by Hoffman and Dench, and his tendancy to slightly sugarcoat his films morphs into a warm glow here which infuses Dahl’s story of two lovers and a tortoise rather beautifuly.

Dahl’s story is a simple one about a shy man called Mr Hoppy who has fallen in love with Mrs Silver who lives downstairs and yet can’t even pluck up the courage to ask her in for a cup of tea. Everything changes though when Mrs Silver gets a pet tortoise who doesn’t seem to want to grow. She can’t be truly happy until her new friend grows bigger and so Mr Hoppy hatches a plan….

The tenderness of this story lies in its simplicity and so I’m pleased to be able to say that this adaptation holds onto the original’s slight fairy-tale nature, despite having to pad out Dahl’s material somewhat in order to fill the running time. The two biggest additions are a narrator (James Corden) who relays the story to us whilst going about his daily routine, and a rude neighbour who rather complicates the plot. Of these two the neighbour is the best addition as he adds a slight tortoise and the hare story into the plot and does little to harm the overall story. However the same cannot be said for Corden’s narration which is totally unnecessary as he sets about telling us what we have just seen and also comes across as saccharine whereas the rest of the production can boast a radiant innocence and sweetness. 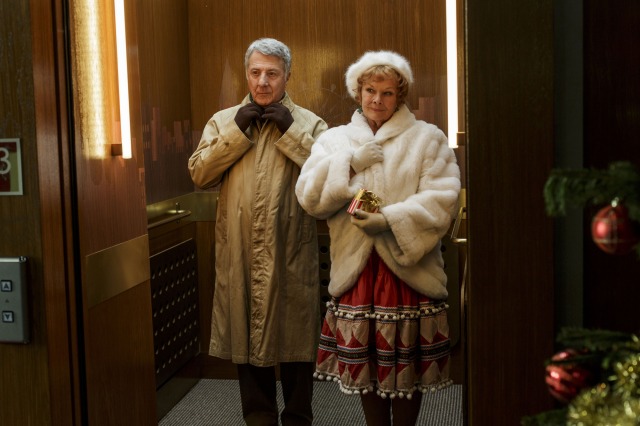 Ultimately this production lives and dies on two things; firstly whether Mr Hoppy’s quiet and slow nature is handled correctly as an underdeveloped and boring lead would kill this flat, and also whether we as an audience can see the sparkling, beautiful nature of Mrs Silver as Hoppy does – thankfully here both elements utterly succeed. Dustin Hoffman as Mr Hoppy is near perfect casting as he sets about embodying a tortoise in human form with slow and carefully considered movements. He is in complete control of his character; using small gestures to build a beautifully realised character on the screen. And Judi Dench is just wonderful; sweeping us off our feet exactly as she should do and complimenting Hoffman’s quieter performance very nicely.

There are few things which I can complain about in this adaptation; the acting on display is excellent, the warm sweet tone never becomes sickly and the film really works for the whole family with its simple, bright but intelligently written tale. The only disappointing aspects were the narration as mentioned earlier and the occasional shifts in tone such as when a sex reference is made by a character which seems somewhat out of place in Dahl’s world. But overall this is a great, heartwarming adaptation of a children’s classic which I thoroughly recommend to all of you.

What is the film’s greatest strength? The two lead performances by Hoffman and Dench.

Would I see it again? Yes, I look forward to its DVD release in March.

Thanks for reading, trot out your thoughts in the comment box below!