A hilarious, timely and troubling exploration of addiction and the American Dream…

It’s taken me well over a year to sit down and write about my thoughts on The Wolf of Wall Street. During that time I’ve seen the film about four or five times and have battled between whether I think it is excellent, fairly flawed, or whether my opinion in fact lies somewhere in between. The reason for that confusion lies not in the performances which are uniformly pitch perfect, nor in the debate some had about its graphic and over the top displays of gratuitous nudity and drug use. Instead what I really was struggling with was whether or not the film was striking the right balance between reveling in Belfort’s depravity and reviling it.

Now one thing which is very clear during the film is that it doesn’t endorse either the lifestyle which Belfort leads, nor the method of business he uses to get there. Belfort gained his money by stealing it over the phone from those who needed it most, in order for him to then ‘spend it better’ on things like Ferraris, hookers and cocaine. I think it’s a very brave and commendable decision which Scorsese took in choosing not to show those victims in the film; only making as fleeting a reference to them as Belfort’s mind ever did. Their suffering is felt all the more strongly due to their notable absence, and we can sense the film’s contempt for Belfort in every frame, even whilst we unwittingly find ourselves getting caught up in his exuberant lifestyle. You see this is not a film which casts Belfort’s actions in a solemn light, instead it allows us to feel something of the rush of his lifestyle, to get caught up in the depravity on screen through humour, fast paced editing and DiCaprio’s magnetic charm. Wolf is disturbingly watchable and it’s the level of enjoyment which troubled me for so long. Scorsese has created a film that feels like it has come straight from Belfort’s own grandiose vision of himself, and if you’re not careful it’s easy to miss a lot of how the director subverts and criticses these actions. 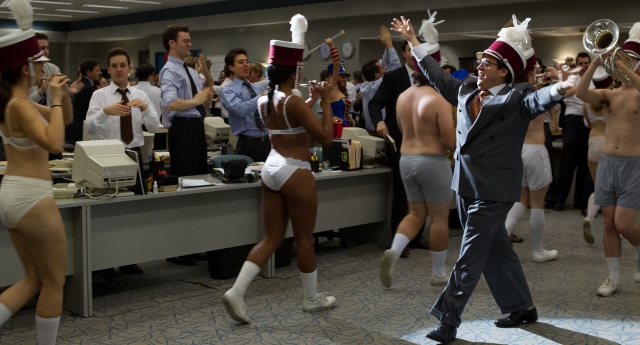 As I mentioned earlier everybody is excellent here. The supporting actors including Jonah Hill, Margot Robbie and Matthew McConaughey all bring their A game, lifting their roles off the page and crafting them into being memorable, quotable and endlessly watchable characters on the screen. However it is Leonardo Di Caprio who deserves a huge round of applause. It is something of a wonder that he can maintain control of such a wildly ridiculous and extreme character and yet he dives into this role with such admirable vigor and comes out on the other side with a nuanced performance that is both exciting and revolting to watch on screen.

The first time around the film’s strategy of piling one crazily excessive scene on top of another over and over again is highly effective, but with every re-watch the need for a stronger edit becomes increasingly apparent. It has been made as long as it is simply because it’s powerful to be hit over the head with so much insanity and it makes you almost physically tired just watching the events play out on screen. You leave the film feeling incredulous in a way which perhaps you wouldn’t quite feel if the film had been only two hours long. Then again if this could have hit us a little harder emotionally and have shown a slightly more bloodthirsty cutting hand in the editing room then it could have been a future classic. As it is it’s a laugh out loud black comedy which gives us a very timely look into our own society, but we go away from it remembering the laughs and crazy excess rather than the darker side of the American dream.

What is the film’s greatest strength? There’s a lot to like but it has to be DiCaprio.

Would I see it again? Absolutely. As overly long as it is this is still a film that’s an awful lot of fun.

Thanks for reading, please do let your thoughts loose in the comment box below!

← The Top Ten Films to See This March
Exclusive Interview With Patricia Chica! →