If you found Inception unsatisfying because its dream sequences looked just like action films and nothing like real dreams, then give Horsehead a try. And if I’m guilty of clichéd film journalism in beginning a review of a dream-related film with an Inception reference then that’s OK, because Horsehead itself goes for the obvious dream clichés: red David Lynch curtains ripple, Riding Hood follows the Wolf, the drowned girl swims for the surface, the horseheaded man holds the giant key… actually I think that last one might be a King Crimson lyric.

After a brief and stylish pre-credits nightmare establishes the imagery which will recur through the film, we are introduced to our hero, Jessica, played by French actress Lilly-Fleur Pointeaux. Jessica is a student in “the psychophysiology of dreams”, a pseudosciencey field which is basically Applied Jung: take a little ether, do some lucid dreaming, and, if you navigate the maze of Tarot/fairy tale/Saint Sebastian symbolism properly, you might uncover the dark secrets that have governed your psychological development since Day One. Be careful though; if your mind believes it’s real, then so does your body! So try not to suffer any debilitating wounds. 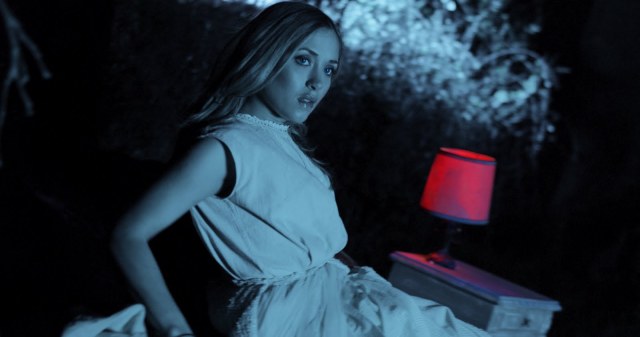 Called away from her study by the death of her grandmother, Jessica goes to stay in the room next to the corpse in the house of her nothing-is-good-enough mother, kindly stepfather, and mysterious groundskeeper. Continuing her dangerous experiments in dreaming, Jessica begins to realise that all was not well in her family, and resolves to unbury whatever it is her mother’s hiding from her. The psychophysiology of dreams seems like an irresponsible thing to teach impressionable youths: while Jessica’s health is greatly endangered both within and without the dream world, there is nothing at stake if she simply gives up. She’ll be curious all her life, and I can’t honestly say in her position I wouldn’t do the same, but the universality of curiosity killing the cat is even more reason not to teach the subject, at least not without a huge “Don’t try this at home” disclaimer.

Horsehead begins very stylishly indeed, but as it goes on it simply runs out of steam. The premise is interesting enough to sustain interest for the first half but the script is, basically, lousy. The mother is a bitch; that’s what she’s there for. The stepfather is nice; that’s what he’s there for. Jessica doesn’t really have any personality; she’s just there to be the protagonist. And the actors, a mix of British and French, work well with what they’ve been given, but there’s only so much they can do. Director Romain Basset, too, works hard, delivering astonishing work on his first feature. Reality is dreamy and soft-focus; dreams are sharp and hyper-real, like a painting. Actually one particular painting is key here: Fuseli’s The Nightmare, the one with the sleeping woman oppressed by a demon while a horse peers ‘round the curtain. The painting is the focal point of the film; the film is extrapolated from the painting. And because it is a painting, Horsehead works only when nobody is talking. As well as directing, Basset co-wrote the script. He’s clearly an emerging talent, and I wish him luck on his next feature, but here’s hoping someone else writes it for him.

So what do you think about Horsehead? Does it stoke your interest or would you rather give it a miss? Let us know in the comment box below and be sure to visit Christian’s site Mediocre Batman!