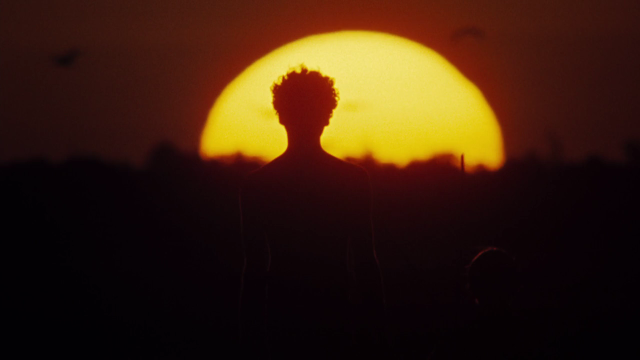 We take a look at Cinesthesia’s re-scoring of Roeg’s classic film: Walkabout…

From one of the organisers of last week’s Short Sighted Cinema Presents ‘HACKNEY’, I was lucky enough to be invited to attend a re-scoring of one of my all-time favourite films, Nicolas Roeg’s brutally beautiful survival masterpiece Walkabout. The film sees two prim English children left to die in the Australian outback by their suddenly murderous/suicidal father, but since this is a review of the re-scoring rather than the film itself, I’ll assume, from here on out, a familiarity with the original. If you don’t have that familiarity – and I was surprised to discover that many of those attending the screening were seeing Walkabout for the first time – then, please, do yourself a favour and make it the next film you watch.

So, onto the rescoring: basically, I liked it. The formerly London-based French six-piece Orchestra Elastique are frighteningly talented; all of them multi-instrumentalists, they improvised the score straight off, having watched the film individually and prepared notes. So certain moods or particular musical instruments were assigned to certain scenes – for instance, a wistful-heroic, Morricone-esque trumpet accompanies the Aborigine boy’s first appearance, and functions as a sort of leitmotif for him from then on – but, as I understand it, the performance as a whole has no composer and was a one-off occurrence. That said, it wasn’t nearly as chaotic as that might make it sound, and the orchestra clearly understand each other’s impulses intimately. The music also did a good job of matching up to the film, like a proper score. At times, in fact, the worst problem was matching the film too closely, Mickey Mousing it, if you like. I don’t need to hear slow Spanish guitar strums to understand a shot of a sunset; if anything, it detracts from it. And the detour into cheesy Italian synths for the Italian sex comedy interlude did nothing for me, but then it is faithful both to the tone and to the original scoring of that particular scene.

On the other hand, there are parts in the original film in which the score is a little too on-the-nose, or at other times, so out there, that it distracts and, ultimately, detracts. And it’s not as if, while watching Orchestra Elastique’s devoted, arduous performance, I ever caught myself missing the original score, with the exception of “Who Killed Cock Robin?”, which has a really sad melody for a children’s song and is difficult to disentangle from the film itself, even if we did get to hear some brief strains of it on the trumpet. And if there was a somewhat predictable tendency in the first half towards tribal rhythms and shrieking, gathering dread then the orchestra’s performance in the second half more than made up for it as they became looser, more interpretative, and less slavishly devoted to exactly what was happening on screen. By the time the credits were rolling, the performance felt like a triumph, the weird, impressionistic, even philosophical score capturing some haunting feeling of the film that is, perhaps, beyond the verbal. And it was a smart move to pick a film for an event like this that tells its story with editing rather than dialogue. If it’s true that all art aspires to the condition of music, then the films of Roeg and others like him must be closer than most.

The other great advantage of this sort of event is that, somehow, it encourages an even more visual reading of the film, even in a case such as this one in which the film is almost entirely visual to begin with. The event’s organiser commented to me during the break that, without audible dialogue, the experience of the film takes on a dream-like aspect, and I couldn’t agree more.

Adding to that, of course, live music exerts a certain power that recorded music simply does not – ever listen to a disappointing recording of an awesome concert you were at? – so even if I’d hated the new score, the event as a whole would be at an advantage versus watching my copy on Blu-Ray at home. Speaking of home media, for those wondering, the film was played on a DVD (from The Criterion Collection, in fact) and projected onto a screen behind the orchestra. The sound was muted but the subtitles were on, a necessary arrangement, probably, for most films, but while Walkabout has more dialogue than I remembered, it has no essential dialogue. I can’t think of a single line whose absence would noticeably damage the film; instead, dialogue here is used for texture, no different from music or sound effects. That goes double for the snatches of talk radio heard throughout the film – effectively, it’s part of the score, and since we’re rescoring the film, wouldn’t it be ballsy to just eliminate the dialogue altogether? And wouldn’t it make the rescoring more its own event? True, it might be offputting and difficult to follow for those experiencing the film for the first time, but all the better if it encourages them to seek out and watch the classic original.