Last Chance to Win Nice Package and The Man From The Future! 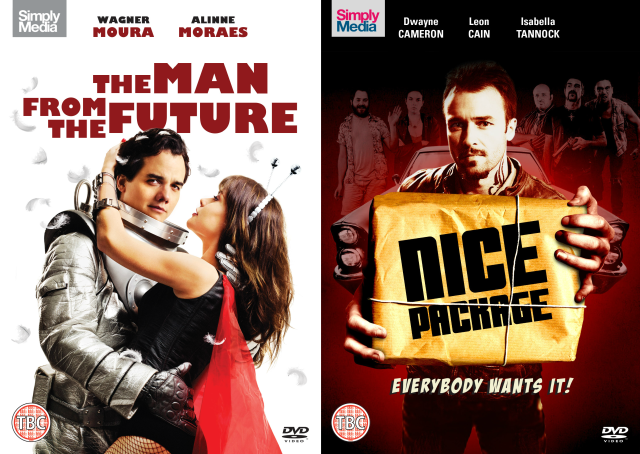 It’s your last chance to win this DVD bundle!

These two comedy featues are released today (9th November) on DVD for the first time in the UK. That’s good news for all of you Rumsey readers located here in the UK as Simply Media have been good enough to grant us a bundle copy of the two to give away to one lucky reader!

Here’s a couple of plot summaries to whet your appetite:

The best things come in small packages in fast-paced Australian gangster comedy, Nice Package. Starring Dwayne Cameron (The Tribe) and Ashley Lyons (Home and Away) and written and directed by ACS Award Gold winning Dan Macarthur, this hysterical action-packed caper makes its DVD debut since its initial release in 2014.

When professional thief Frostie (Cameron) is caught stealing a precious package, he is forced to take a feisty young woman, Michelle (Isabella Tannock) hostage. Unluckily for him, she knows how to fight back. When he takes her back to his gay best friend’s (Leon Cain, The Suicide Theory) house, he can’t bring himself to dispense of her, despite pressure from his deranged, yoga-obsessed boss. Now the three of them must face an eccentric rabble of thugs who will do anything to get their hands on the mysterious package.

The Man From The Future

Atomic time-travelling romantic comedy The Man From The Future starring award winning Wagner Moura (Elysium) comes to DVD for the first time ever in the UK since its original release in 2011 and UK premiere at the Sci-Fi-London Film Festival in 2013.

Zero (Moura) is a brilliant but bitter scientist still haunted by a college party 20 years ago where he was publicly humiliated and lost the love of his life, Helena. But he soon gets the chance to rewrite history when an accident with one of his inventions opens a portal to the past. ‘

To enter all you have to do is answer the simple question below by Friday 15th of November.

Question:
What did Zero lose at the party in The Man From The Future? Was it:

A – His time machine?

Remember the give-away closes on the 15th of November.