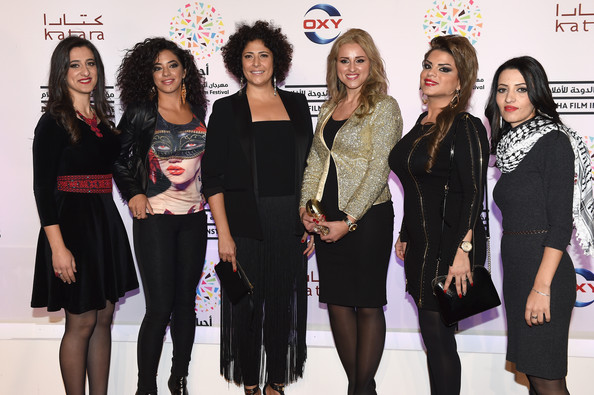 Today we are pleased to welcome Director Amber Fares and Team Leader Maysoon Jayyusi to the site to tell us all a little about their new film Speed Sisters. This exciting new movie tells the story of the Middle East’s first all women racing team, the challenges they face and the passion they have for their sport. Read on to hear all about the film and get a sense of why we here at Rumsey’s highly recommend that you check it out when it hits cinemas and on-demand services from the 25th!

First of all, do you want to tell us how you came to make this film?

Amber: I was living in Ramallah and I was invited to go to a race, which at the time wasn’t something I was expecting to see in Palestine, given the roadblocks, the checkpoints, and the general lack of access to space. But we went to Bethlehem, and there was a race on the top of a hill on this huge tarmac which actually used to be Arafat’s helipad. There was this incredible, festive scene – cars revving, crowds cheering, music playing – and in the middle of all this were these girls, putting on their helmets and getting ready to race. I thought it would be an interesting way of telling the story of a place that we all think we know from having seen it in the news. So that’s how we met.

Maysoon, how did you find your way into the racing scene?

Maysoon: Actually, we used to race all the time in our day-to-day lives, from living under the occupation, waiting at checkpoints sometimes for an hour or more, so we started to drive faster and faster to reach our places of work or education, not only to save time but also for the feeling of freedom – after we cross checkpoints, we want to fly.

Did you set out to create an all-women racing team?

Maysoon: We never planned it, until we started racing and realised there were all of us girls racing. We felt like we needed to help each other, and that was when we decided to become a team.

How has the Speed Sisters’ presence, on the racing scene and also in the film, changed perceptions of women in Palestine?

Maysoon: When the film is shown, people change their ideas about women’s situation in Palestine. Previously, many people assumed all Palestinian women just work in kitchens.

Maysoon: No, people outside of Palestine. Internationally, most people have no idea about women in Palestine. When people see the film, they’re shocked to see that there are women racing in Palestine. 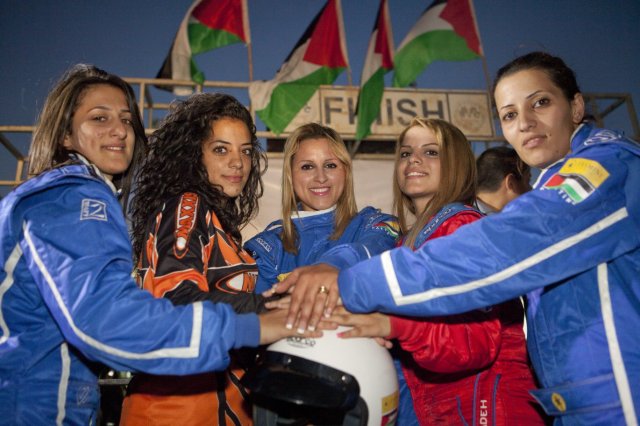 What challenges did you face in making the film?

Amber: The challenges we faced making the film were the same challenges people face living in Palestine, in terms of mobility, safety, passing through checkpoints, people getting shot…you can throw your production schedule pretty much out the window. But it was amazing the amount of support we got from Palestinians. People would say, “Oh, I heard you’re leaving for Jenin today, avoid this road”, things like that. But people also helped us out a lot with filming permits, whether in restaurants, people’s homes, at racetracks – we actually had less of some of the problems you usually face filming.

And what about the military checkpoints?

Amber: Well, the checkpoints are always an issue, but I have it quite easy travelling on a Canadian passport, and so I can generally get through them easier. But we were stopped quite a few times for random checks – they’re called fly checkpoints – but, because of the passport I have, the same rules don’t necessarily always apply.

What was your crew’s attitude?

Amber: Well, we had a small crew, but also a very large crew. The people travelling with me were a core crew consisting of a Palestinian-American with an American passport, and a cinematographer who’s German. They were dealing with the material on the girls’ lives, and then for the racing scenes, we had a much larger crew. That caused difficulties because there were always roads that certain people didn’t have access to, so it took a huge amount of co-ordination. But I would say that their attitudes were similar to mine. There’s a lot of injustice in Palestine, and that really comes through. There are a whole series of identities that are administered by Israel to help control the population, which is really frustrating, because people aren’t always free to travel to certain areas. But that’s day-to-day life in Palestine, it becomes second nature. It’s only when you step out that you really realise the absurdity of it.

On a more technical level, what did you use for filming?

Amber: For in-car and on-car shots, it was all GoPros. And then, depending on budget, we’d use my camera for behind-the-scenes, and one to four different cameras for different angles on the race scenes. We used everything from, like, C300s to 5Ds. It was an all-Palestinian filming crew for the race scenes, so we were able to tap in to the film scene there, which was really great.

Were you seeking a narrative with the film, or was that something that emerged organically?

Amber: It’s kind of both. You’re always looking for potential storylines, but when you’re dealing with a film that has potentially five major characters, you have to look out for what could become the plot. It was only in the second year, for instance, that the rivalry between Betty and Mara became apparent. We weren’t sure then whether it would be the main storyline, but it was definitely something that stood out. It’s hard to tell how things will play out, but you try to get as much material as possible to give yourself options in the edit. We had about 500 hours of footage – I stopped counting at that point! 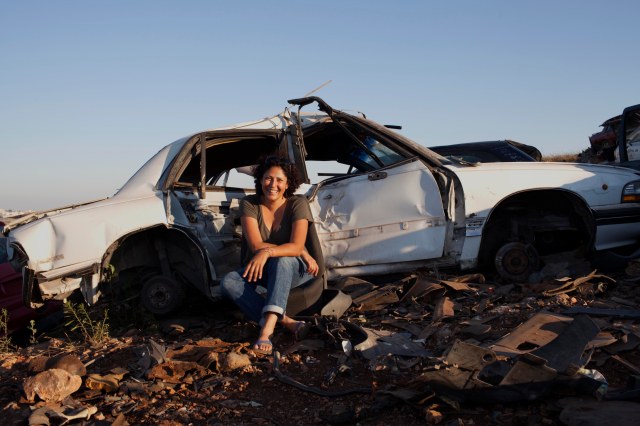 Was there anything you were sad to lose?

Amber: Definitely, there were a lot of things, but you have to kill your babies. There was a scene of Noor having dinner with her family that was really nice, and a scene where her mom surprises her with a new car.

Maysoon, in watching the film do you recognise the characters?

Maysoon: Yeah, definitely. Sometimes people ask me if I’m acting in the film, but I’m not. If you want to act for four years, it isn’t possible. Maybe at the start you could play someone else, but after four years, it’ll be you. And with all these cameras following us, eventually we got used to them and we would just forget we were being filmed at all.

Amber: These guys were really great. I’d just show up everywhere with my camera, and they’d be fine with it. I was following them around absolutely everywhere, they must have wondered what I was planning on doing with all that footage!

Maysoon: The people living around us – my neighbours, or boss – everyone knew her [Amber].

Was it easy to get used to?

Maysoon: Yes, it was. She was good at making us feel natural, and bringing out the deepest parts of ourselves.

How has life changed since the film came out?

Maysoon: We feel more self-confidence now that we can see how much we’ve achieved, and knowing people all around the world are seeing us and feeling proud for us. We feel a sense of power, to tell people what we’re facing, and how we live, and what we want.

What’s next for you?

Maysoon: To continue. The film is real life, so just because the film is finished, we are not. We have even more responsibility now that people know about us. Recently I’ve been thinking about road safety – I’d like to see programmes in the school, showing teenagers that there are places they can go if they need to race, not to speed in the roads. That advice can save people’s lives – deaths from road accidents outnumber deaths from disease.

Amber: That’s really important. In Palestine, there’s not a lot of road safety and there’s a lot of irresponsible driving, so that’s an important message.

Maysoon: Not just in Palestine, all around the world.

Speed Sisters is in cinemas and on-demand from 25 March 2016, will you be checking it out? Let us know in the comment box below!