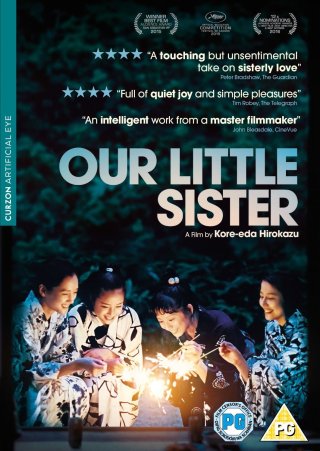 An elegant ode to sororal relationships which sparkles with a quiet sensitivity, charm and poignancy…

Hirokazu Koreeda’s Our Little Sister is a film in which subtle shifts within a character’s life slowly reverberate down and unearth great wells of emotional turmoil and buried conflicts. As a film it’s a triumph in the art of restraint; extremely confident in its decision to reveal layers of depth slowly over the course of the film, allowing its audiences to indulge in the rich sensory detail of homemade plum wine or the enchanting views of flowering cherry blossom. As a work of art it is a thing of real beauty; as visually engaging as it is contemplative and questioning. Some audiences may struggle with the slow pace but if they can just relax into the film’s rhythm they will discover a carefully presented gem which lingers long after the credits have rolled.

The film opens with three sisters who, after receiving word of their estranged Father’s death, learn about their younger half-sister who they will meet if they attend his funeral. On the surface the three young women don’t seem to be particularly affected by his death; after all he set in motion the events which destroyed their family unit when he abandoned them and their mother for an affair with another woman. Shortly afterwards their mother also walked out on them and the girls had to find a new dynamic amongst themselves and pick up the pieces. Years later though with the introduction of their new younger sister (Suzu Hirose) the loss of their childhood is thrown into sharp relief and tentative questions are raised about responsibility, the family structure and what it means to reclaim your childhood when living in an adult world.

All four lead actresses give highly commendable performances here. It’s a real joy to watch a family on screen and not just buy them as a group but wholly submit to their performance, allowing yourself to forget that they are play acting and haven’t really grown up together over the years. Rarely have I found myself so completely taken in by a family relationship on screen as I was whilst watching Our Little Sister. Each of three actresses who play the older sisters (Masami Nagasawa, Haruka Ayase and Kaho)  have a real sense of history with each other and its a joy to watch them bounce off each other in different ways when Suzu Hirose enters the group.

The film is a beautifully observed piece of work. A sensory experience which delights us with its humour, insight and characters but which doesn’t forget to underpin that with complex, emotional issues which give the film its necessary heft. All four actresses are given the time and scenes necessary in order to shine and build characters who feel real and complex and the excellent score, direction and script bind the tale together and allow the delicate story to unfurl.  A pleasure from start to finish, Our Little Sister is a very strong contender for the one release you should buy this month.

Our Little Sister arrives on Blu-Ray and DVD today (13th June), will you be checking it out? Let us know in the comment box below!