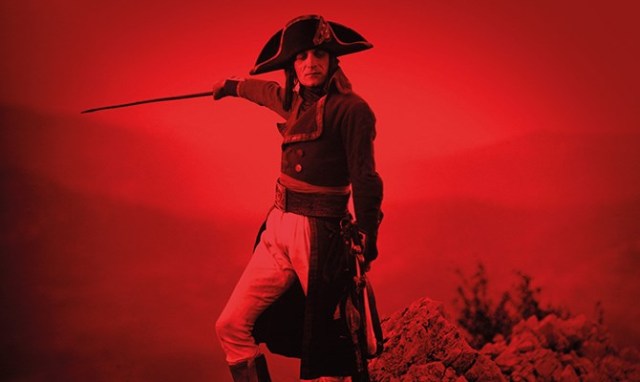 Making one of its intermittent returns to the big screen, Abel Gance’s five-and-a-half hour (6+ with intermissions!) 1927 masterpiece Napoleon is back and better than ever. This time around, the cause for renewed celebration is the picture’s long-awaited arrival on home media formats; the BFI is also currently streaming Napoleon online.

Home media is well-suited for a picture of such challenging length, but for the truly hardcore, the cinema is the only way to go. In my case, the cinema in question was Brixton’s The Ritzy Picturehouse, which was lucky for me because its seats are a damned sight more comfortable than your local Odeon, an important consideration given the bum-ache duration they’re expected to be used for here. Also, the staff are friendly and the bar is reasonably-priced. If I didn’t live at the opposite end of London from Brixton, I’d be a regular there.

As it is, it served well for Napoleon. The film’s famous final sequence, a triptych of images requiring three separate projectors running at once, really does have to be seen on the big screen to be properly appreciated. Similarly, the epic score, which makes liberal use of cues from folks songs, national anthems, and Beethoven, practically demands to be blasted through a cinema sound system. In fact, the score used for this particular restoration – and there have been many; see Wikipedia for a list – was composed by Carl Davis in 1980; nonetheless it has become the favoured score for the film, and it isn’t hard to see why.

As to the content of the film itself, it is a stunning work of major cinematic power, even as it approaches its hundredth birthday. Abel Gance was a major early auteur; Eisenstein was influenced by his revolutionary editing techniques, and even the film’s French title, Napoléon vu par Abel Gance, announces the director’s total artistic control. Gance’s ambition was without limit. The three hundred minutes of film here were intended to represent only part one of six. Consequently, by the end of the film Napoleon has still not been crowned Emperor, and generally the period of his life here covered is one mostly skipped over, covering his schooldays, time in Corsica, early military success, and youthful interest in Revolutionary politics. Still, there is foreshadowing of what is to come; Napoleon is continually watched over by an imperial eagle, given to him as a gift before it is released a cruel schoolboy jape; while in a geography lesson, he learns about St. Helena with a shiver of dread. From the very beginning, he is otherworldly and statuesque. This is the figure from Napoleon Crossing the Alps, the Great Man of the Eroica Symphony. The acting here is naturalistic for its time, and a surprisingly impressive performance comes from Vladimir Roudenko, who plays Napoleon as a boy. The “three gods” of the revolution, Danton, Marat, and Robespierre, figure heavily; Edmond Van Daële makes a comical Robespierre; Alexandre Koubitzky a wild, exaggerated Danton, and Antonin Artaud an understated Marat. The director himself even shows up as Saint-Just. But all pale before the mighty figure of Napoleon as essayed by Albert Dieudonné, whose towering performance is the perfect complement to the epic scenes staged by Gance; the film opens on a school snowball fight, “ten against forty”. It is staged just like a real battle, and despite the humourous bathos of that concept, it is a commanding, powerful scene that soon wows audiences into a hushed respect. One mammoth chunk of the film deals with the Siege of Toulon, and is authentically gruelling, mud and smoke and death overwhelming the frame and the viewer. Elsewhere, a storm raging at sea is intercut with scenes of the Terror. Gance’s ingenuity seems unlimited before the viewer is even close to the ending sequence. One early-ish extended chase scene, in which Napoleon is finally driven out of Corsica to the ocean, makes unprecedented use of long shots and naturalistic lighting. Gance clearly anticipated the use of colour in the cinema with his tinted frames, and is often palpably frustrated by its absence. A beautiful scene in which Napoleon goes to talk to “his friend the ocean” is lit in twilight blue and violet, and is truly astonishing. Music even plays a key rôle, including a scene in which “La Marseillaise” is sung for the first time. For early screenings, the song was sung live by Koubitzky, a singer as well as an actor; plainly, Gance anticipated sound as well as colour. What might we have seen in Parts Two through Six? 3-D? 4-D? Computer-generated imagery?

Sadly, we’ll never know. But what we have is astonishing. The restoration job that has been done on the film simply has to be seen to be believed, and the story behind its preservation, by silent enthusiast Kevin Brownlow, is fascinating too. You’ll probably never see a silent film as well preserved as Napoleon, despite one missing reel. Given its total number of reels, to be missing just one is a remarkable stroke of luck for all film enthusiasts. If you count yourself as one, see Napoleon. It doesn’t even drag. I promise.

Are you desperate to see Napoleon? Let us know in the comment box below!