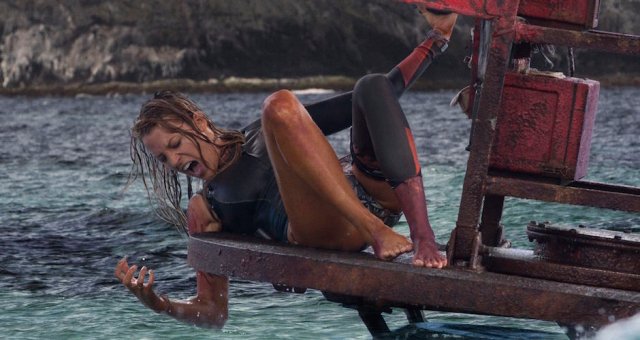 Blake Lively stars as Nancy, a medical student who has all but given up on her profession of choice after losing her mother to cancer. Instead of studying she is running away from her life; partying, exploring and surfing her way around the world. We catch up with her just as she tracks down the very beach she has been hunting; the one her mother was photographed on years ago when she was pregnant with Nancy. What was intended as a trip to catch big waves and to connect with memories of her mother instead swiftly becomes a desperate fight to survive when she is stranded in the middle of the bay, hunted by a great white shark.

What’s smart here is that Nancy is never washed out into the open ocean away from shore. Throughout the entire movie the safety of land is always there, just out of reach. As she clings to a rock in the bay we know that she only has to swim a pretty short distance in order to be safe, but are also hyper aware of just how impossible it is for her to out run the circling great white. What the film comes down to is a battle of wits and stamina in which our hero must use every possible tool at her disposal in order to try and attract help, fight off the shark and not give in to either the freezing cold night nor the blistering heat of the sun.

Whilst The Shallows has echoes of many other films here, and of course heavily lifts from Spielberg’s classic with shark POV shots amongst other things, it quite quickly finds its place as a survival against the odds movie rather than a shark horror film. It succeeds because it embraces elements which have made other films great and then strips them down and just goes for it full throttle. With the exception of a sixty second tacked on ending there is no wasted film here, running to a very brief 87 minute run-time. The filmmakers know that their audience is here to see Blake Lively use every ounce of muscle and intelligence in order to save herself from a monster, and it delivers.

What really does let the film down though is its conclusion where the pretty well crafted logic and tension of the film is abandoned for an over played climax. It’s a shame to see the film lose its grip on what made it succeed so well, but it doesn’t break the film and you get to enjoy two thirds of a well crafted thriller and then one third of b-movie silliness.

What makes it so easy to enjoy the film though is Blake Lively’s performance; she clearly realised that a film like this in which she is, for the most part, alone with a monstrous shark was a perfect opportunity to flex her acting muscles and she makes the most of it. Her performance is immensely physical and well played, we believe her when she is terrified and when she is trying to out smart her opponent. The script doesn’t always trust us and her enough to let her demonstrate her thoughts through action, instead she has to mutter lines like “that over there is to far to reach”, which is distracting. But Lively and the film rise above such niggles and deliver a well executed, thrilling survival movie.

The Shallows is out on DVD and Blu-Ray now, will you be checking it out? Let us know in the comment box below!

← Exclusive Interview: Ashley Mary Nunes Talks All Through the House
I Am Not A Serial Killer – New Release Review →