Last Chance to Win ‘The Man Between’ on DVD! 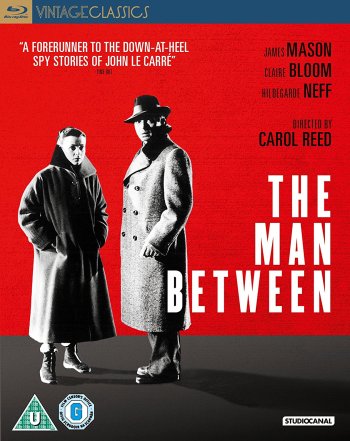 It’s your last chance to win a copy of this classic!

We here at Rumsey’s are very excited to announce that The Man Between has now been released for the first time on DVD and Blu-ray by Studio Canal in a stunning 2k restoration. What’s more we are able to offer up two DVD copies for you to win!

Here’s the official text to whet your appetite:

‘Set against the backdrop of a haunted, newly divided Berlin, Ivo Kern (James Mason: 5 Fingers, Spring & Port Wine, Cross of Iron) – a troubled former lawyer now working the Black Market – gets caught up in a cat and mouse chase with potentially tragic consequences as he attempts to free a young British lady (Claire Bloom: Richard III, Look Back in Anger, The Spy Who Came in from the Cold) who has been kidnapped in a case of mistaken identity. Starring British screen icons James Mason and Claire Bloom CBE alongside German sweetheart Hildegarde Neff, The Man Between is acclaimed Oscar-winning director Carol Reed’s follow on to the hugely popular The Third Man starring Orson Welles.’

We here at Rumsey’s have decided to team up with Studio Canal in order to promote the release and they have been good enough to grant us two DVD copies to give away to lucky Rumsey readers! If you want that to be you then all you have to do is answer the simple question below by 17th January.

Question:
Which classic actress stars in The Man Between? Is it:

Remember the give-away closes on the 17th January.